You are here: Home / About Us

Valley Transit is dedicated to providing high quality and efficient public transportation services that are responsive to the needs of the entire community, promoting quality of life and a healthy economy.

Following repeal of the Motor Vehicle Excise Tax in 2000 by the Washington State Legislature, Valley Transit downsized hours of service and decreased the number of routes to reduce the workforce size and trim expenses. Passenger fares were raised to increase local revenue and Valley Transit was able to slowly obtain additional grant funds from state and federal transportation sources.

Voters residing within the Transit District (the combined area of Walla Walla School District Number 140 and College Place School District Number 250, excluding the Frenchtown and Eureka election precincts) approved Proposition 1 on February 9, 2010 to increase the sales tax dedicated to public transportation by an additional 3/10ths of one percent with over 76 percent voting in favor of the measure.

Fixed-route service is provided throughout the Walla Walla and College Place urban area. Eight routes meet at a centrally located transfer center in downtown Walla Walla at Main and Fourth Streets. Eighty percent of the homes within the Walla Walla and College Place city limits are within 3-blocks of a Valley Transit bus route, so convenient service is never far away. All buses are air-conditioned for passenger comfort and have low-floors with ramps at the front door to make boarding easy for people who use mobility aids.

Most routes have bus service every thirty minutes and two neighborhood routes are run each hour. Weekday service begins at 6:15am and ends at 5:45pm. A smaller Flex-Route service that is more appropriate for periods of lower demand operates on weekdays from 5:45pm to 9:10pm, and on Saturday running from 10:45am to 6:15pm. The bus system is closed each Sunday and six major holidays, however the Job Access program for work transportation operates every day.

For people who cannot get to a bus stop, or for some other reason cannot ride the bus because of a disability (physical, mental, or sensory) there is a special service called Dial-A-Ride. Dial-A-Ride consists of specially equipped mini-buses whose operators will pick up a passenger in front of their home, assist with boarding the mini-bus, and drop off the passenger in front of their destination. This is a shared ride service which means other people may be on the van at the same time, so extra time needs to be scheduled to allow for other stops.

Vanpool is the newest public transportation service, being launched in 2009. It is designed for work commuters who live in the transit district and have a long daily commute to work. This service is most beneficial for people whose job site is twenty or more miles from home. Some of the vanpool groups have members who all work for the same company, and other vans have people who work in the same vicinity but for different employers (i.e., at the Hanford site). One of the vanpool members is the driver of the vehicle and members share vanpool expenses, however vanpool members find there is a significant cost savings compared to driving alone. Some employers have incentive programs for their employees who rideshare in a carpool, vanpool, or by riding the bus, so be sure to ask your employer if you are eligible for these benefits.

As you can see, Valley Transit has the Walla Walla Valley covered for convenient, safe and economical transportation. Climb aboard for a relaxed ride to see the sights of this beautiful valley. 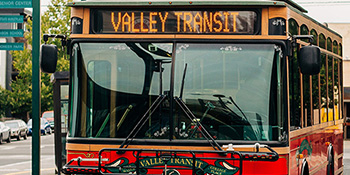 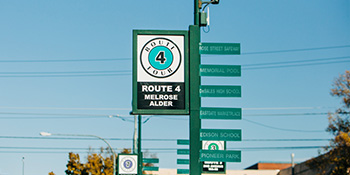 Find out our Routes Information